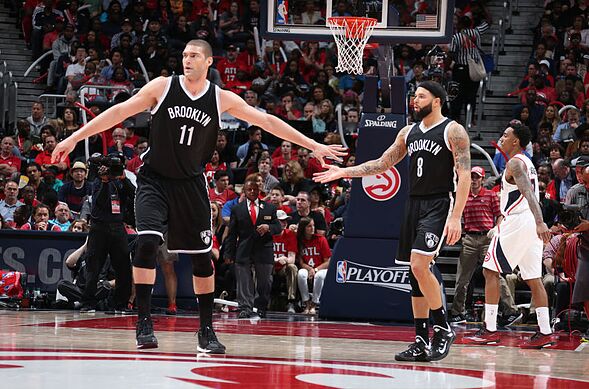 ATLANTA, GA – APRIL 19: Brook Lopez #11 and Deron Williams #8 of the Brooklyn Nets shake hands during the game against the Atlanta Hawks in Game One of the Eastern Conference Quarterfinals during the NBA Playoffs on April 19, 2015 at Philips Arena in Atlanta, Georgia. NOTE TO USER: User expressly acknowledges and agrees that, by downloading and/or using this Photograph, user is consenting to the terms and conditions of the Getty Images License Agreement. Mandatory Copyright Notice: Copyright 2015 NBAE (Photo by Nathaniel S. Butler/NBAE via Getty Images)

The Brooklyn Nets experienced a lot of change in their 4th NBA decade, moving from New Jersey to Brooklyn in the process. Who were their 10 best in the span?

For a franchise that survived the wild ride that was the American Basketball Association in the 1960s and 1970s, the Brooklyn Nets might have experienced their most turbulent period during their fourth decade in the NBA, from 2006-16.

More from Nothin' But Nets

It was a time of three home arenas, including a two-year waterfront rental in Newark, N.J. for their last seasons as the New Jersey Nets from 2010-12, after playing 29 years at the East Rutherford arena known at various times as Brendan Byrne Arena, Continental Airlines Arena and the Izod Center.

In 2012, the Nets made their long-anticipated move back across the Hudson, moving to Brooklyn and the spanking-new Barclays Center. The club arrived having missed the playoffs for five straight seasons, but new general manager Billy King was assembling a club that could compete.

At least until he made the worst decision in his 15 years as an NBA GM.

After the Nets were upset by the battered Chicago Bulls in the first round of the 2013 playoffs, King rolled the dice on a massive trade in July 2013 to bring former MVP Kevin Garnett and former NBA Finals MVP Paul Pierce from the Boston Celtics.

The trade sent five players to Boston, with Garnett and Pierce coming to Brooklyn along with Jason Terry and D.J. White.

Adding Pierce and Garnett to an already-veteran core of Deron Williams, Joe Johnson and Brook Lopez, King turned the reins over to rookie coach Jason Kidd, a former Nets great who had retired as a player about a week before he was hired to coach in Brooklyn.

King thought he had built a team that could win now.

— Kyrie Irving is proving once again that he can't be a No. 1 in the NBA — NBA: Biggest surprises and disappointments midway through 2019-20 — NBA Power Rankings: Rudy Gobert leads Utah Jazz up the charts — Brooklyn Nets: The team should target shooting at the trade deadline  — Brooklyn Nets: Joe Harris climbs to fourth all-time in three-pointers made in Nets history
More News at Nothin' But Nets

But when Lopez went down with another injury to his troublesome right foot and age limited the effectiveness of Garnett, the Nets huffed and puffed to 44 wins, surprising the Toronto Raptors in Game 7 on the road to get through the first round before getting swallowed whole by the two-time defending champion Miami Heat in the conference semifinals.

Pierce left via free agency after one season in the borough. Garnett would be traded back to his first club, the Minnesota Timberwolves, at the 2015 trade deadline.

Kidd, meanwhile, was also gone after just one season, jettisoned to the waiting arms of the Milwaukee Bucks after an attempted palace coup against King, per New York magazine.

Brooklyn fell below .500, battling the top-seeded Atlanta Hawks for six games before losing in the first round.

And then the roof fell in. The Nets collapsed to 21 wins in 2015-16, without a first-round pick to help start the process of recovering.

There were good moments mixed in and some solid performances along the way during a wild, wild decade. Here are the 10 best Nets for the 2006-16 period, with players needing 150 games played to be considered.

Next: Bogey came from Bosnia with a shooter's touch
Next1 of 11Prev post
Use your ← → (arrows) to browse
Load Comments
Event Tickets
Powered by StubHub
Top Stories